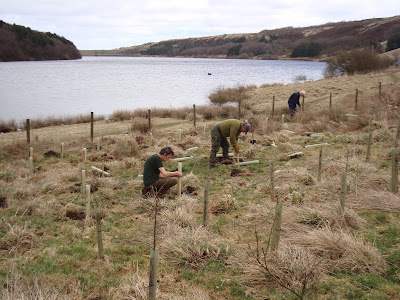 Today's blog is written by Philip, as I was out wining and dining.

To paraphrase a wise man, the best planting days are enjoyed by the least number of people. Yesterday at Scammonden was one such day.
Six people planted 170 trees after a long trek to the site, which was adjacent to a footpath along the shores of Scammonden Water. A hawthorn hedge was planted as a woodland edge, with sessile oak and hazel behind. There are still 30 trees to plant in this sector along with some alder in another sector. Brian, Peter, Neil, Philip, Duncan and his daughter Sophie did a good job in adverse conditions - sunshine. N.B. the photos were taken after the sun had gone in. We missed our weekly fix of cake though.
Posted by The Colne Valley Tree Society at 09:37 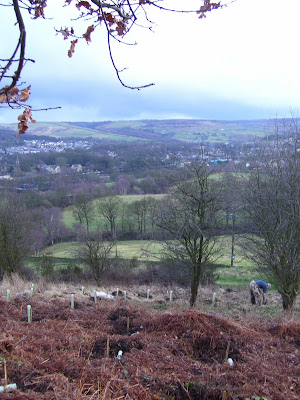 Philip and I went out on a Friday evening, in an attempt to plant some of the season's last trees. Back to High Brow at Meltham to add another 60 trees to the earlier planting. It rained a bit a the start, but then cleared up into a pleasant almost spring like evening. And the two of us planted 60 trees in under an hour and half. Which wasn't bad.

Oh, and the blog title is the title of an old REM song.
Posted by The Colne Valley Tree Society at 02:25

Carry on, mind that chicken. The sequel 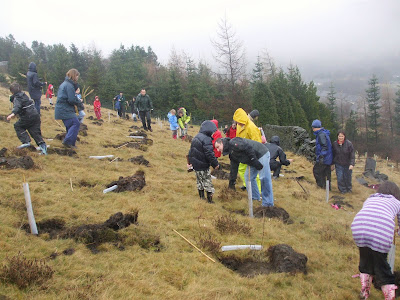 Our second week at this site, and we were joined by Mrs Shires and Lindley infants OWLs group. Incredibly brave of them, condsidering it was a miserable rainy morning. The kids didn't seem to mind though, and another 400 or so trees got planted. Amazing progress. Thankyou again to Yolande for organising, and for all the parents and children who joined in. Lets hope the weather is nicer next time. I took no photos this week, as it was a bit wet, and I have to admit I'd left the batteries in the charger anyway. So thank you to Duncan for the picture. In just two Saturdays around 1000 trees got planted on this site, pretty darn impressive.
Posted by The Colne Valley Tree Society at 06:48

Carry on, mind that chicken! 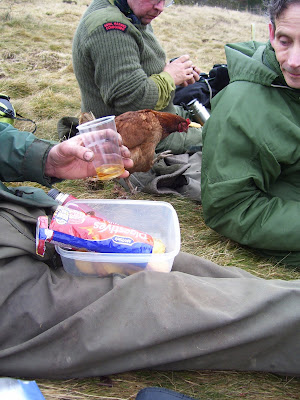 Dave, Duncan, Neil, and chicken, and whiskey.
Our first week at Glen View Marsden, where there are quite a lot of trees to be planted. Thanks to Brian we had a good turnout, with Richard, Roger and Ramsay joining us. Old stalwarts comprised me, Philip, Neil, Dave, Trevor, Peter, Brian, Geoff, Heidi, Duncan - and making a special guest appearance Ali. Neil and Sarah the landowners also pitched in, and were a bit taken aback at how speedy we were. We planted around 400 trees, which is a good mornings work. We were mildly harassed by chickens, who were excitedly looking for worms even before we had finished digging a hole. Homemade biscuits at break time. And Whiskey courtesy of Brian. Weather was kind to us, cool at first, but brightening up at the end. Fingers crossed for next week at the same site. Down the hill to the Riverhead afterwards, though some of the mature chaps went to the Vineyard, the gentlemen only club at Slaithwaite (imagine a cross between Last of the Summer Wine, and Deliverance). 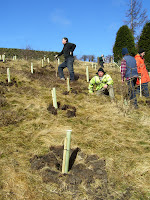 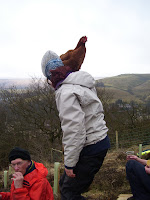 Ali adopts a chicken.
Trevor surveys the distance.
Posted by The Colne Valley Tree Society at 06:50

Huck Hill. Will plant for soup. 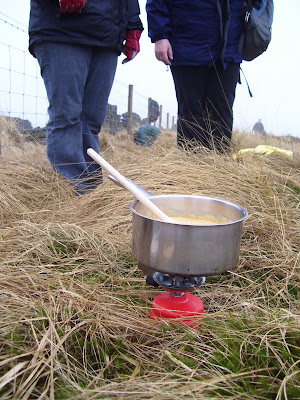 The soup that was not.

Third and last week of this season at Huck Hill, and we got the majority of the 600 trees planted over the three weeks. Some were left for Iain the landowner to do later when his scrape and pond liner are in place. Weather was mixed, some drizzle and lots of low cloud, but once or twice there was a bit of brightness and a view. Lots of extra volunteers again, thanks to Rob and Mick, and to Diane and several friends. Diane had brought soup along, but her camping stove had run out of gas. So we had to make do with the home made lemon drizzle cake and luxury biscuits provided by Ian. Its nice working up at Huck Hill, but a long slog getting up there.

Apologies for not writing this sooner, Ali. 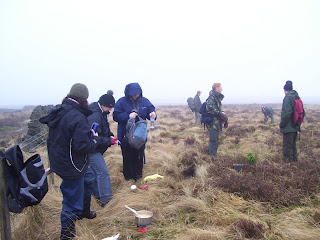 Assembled throng.
Posted by The Colne Valley Tree Society at 07:05