The stakes and guards that we use to protect the young trees are quite expensive, and in these financially distressed times it pays us to scour the hillsides for tubes that either the trees have outgrown, or in some cases where a tree failed to grow at all. Because of the high volume of planting at Scammonden, over several seasons, there is a lot of scope for reclaiming.

We retrieved 46 deer guards and left them by the fallen pine at the Northerly end of the site, and another 35 left under the tree above the Scout hut car park. We will return to the site in the coming months and plant new trees using those stakes and guards.

We also found 120 stakes and guards from the other end of the site, and took those to Outlane, for planting there.

We were, Stephen, Remy, Dave, Ben, Philip, Neil, Trevor, Jess and myself. Guy and Mandy were also on site, but at the other end. And we were joined by local journalist Marie-Claire, and her dog.Cake was lemon drizzle.

Sad to say though that we did find evidence of deer having nibbled at the young trees, despite our use of tall guards. It was most evident at the end of the site, next to some established woodland, suggesting that the deer lie up in  the woodland, and pop out for a bite to eat now and then. I suppose its nice that we are supporting biodiversity, even if that does mean providing snacks for deer. 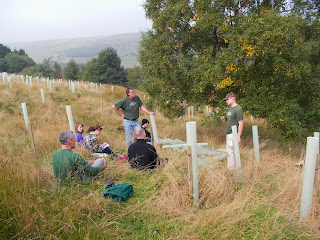 More fencing, and a plague of flies

Myself, Dave, Geoff and Ben met at the nursery. We put up a bit more fencing, then split up. Dave and Ben stayed on to tidy the nursery, and myself and Geoff went up to Scammonden. There we removed 48 deer guards and 21 hare guards from failures, from the area nearest to the pines and start of the Scout hut track. We piled up the stakes and guards nicely, and can return to replant using those this winter. Geoff and myself only covered small area of the hillside, but still found 70+ failures that can be replaced. Re-using the stakes and guards in this way will save us a great deal of money, meaning we will be able to plant 2 trees on site for every £1 donated. A £250 pledge from the Green Building Store will enable us to plant 500 trees.

There were a lot of flies up there though. And lots of nettles. We were very brave. 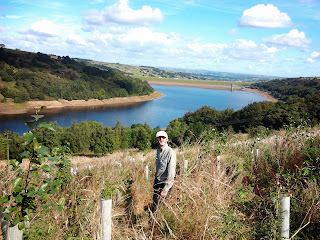