It sounds like a Guardian cryptic crossword clue, but describes what happened. Trevor, Brian, Duncan and a fellow that I don't recognise from the photo were up at Scout Top, Marsden, removing stakes and guards from trees that no longer needed them. Looks like it was a very pleasant morning. 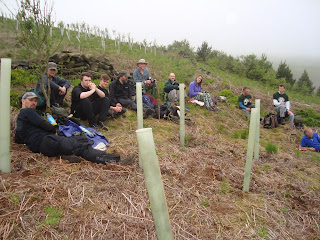 First day of our assault on the Wessenden Valley's bracken infestation. We were: Philip, Guy, Mandy, Mandy's two sons and their dad, Dave, Peter T, Geoff, Jess, Ben and John. Cake was Bakewell tart. As usual, the debate raged about the best way to discourage bracken from growing back - breaking VS cutting basically.
Posted by Simon Lyes at 03:42

This morning we were over Meltham way. Knocking back the bracken for a load of oak and rowan planted a couple of years ago. This should be the last Summer that we have to do this, as most of the trees are out of the tops of the guards. We were: myself, Duncan and Harvey the dog, Ben, Dave, John, Geoff and Philip. Cake was Eccles cakes, and v.nice they were too.
Posted by Simon Lyes at 02:57

This week, myself, Philip, Hap, Geoff, Steve and Stephen went up to Wholestone Moor to sort previous planting out. There were guards that needed making upright, and guards that needed removing. It was insanely windy, so while sunny, was quite cold. Hapless Hap (first time he's heard that one I'm sure) managed to cut himself, but was restored by the first aid kit. Some of the guards that needed straightening were due to somewhat less than thorough original installation. See pics. Bang 'em in harder folks. Also, folks, I found a full pack of 10 stakes abandoned on the hillside, and Steve found a set of 5 guards. Tsk tsk.