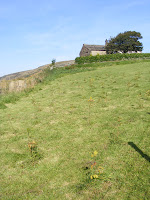 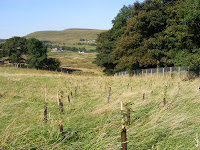 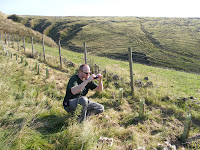 A lovely saturday morning for some site visits. Philip and I went up to Well House farm first. This site had suffered from sheep attack soon after the first planting, so we were eager to see how things were going. Subsequent growth of both trees and grass shows that the field is now secure. There were some Hawthorn that had never recovered from being nibbled, and some strangely failed Scots pine. But other than that it looked good.

Next visit was Green Owlers. Again, our nemesis the sheep have attacked. It looked like a sheep or two had got in recently and nibbled lots of the tops out of the new trees. Very few were showing above the tops of the guards, but all were healthy inside. The owners son assured us that they were on the case as far as further sheep ingress was concerned, and they even had an electric fence down one side.

Just up the road was White Hall Barn. No sheep can get in there, and the owner has been carefully strimming around the trees to ensure them lots of light. Looks good.

Next we went up to Merrydale to look for Duncan, we collected some stakes and guards and took them off site.

Last port of call was to see a householder over by Jerusalem farm at Linthwaite. We discussed planting a windbreak down one side of the field behind his cottage. A small job for us, but every little helps.

Posted by The Colne Valley Tree Society at 09:51