Wholestone Moor - Finally we get to plant some trees! 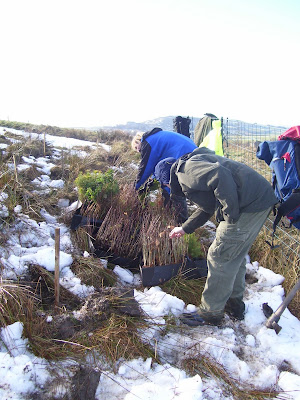 Dan and Dave figure out which trees are which.

Officially then this is the second week at Wholestone Moor, a very large shelter belt site between farmland and the M62, but in reality this was the first week of real planting. I think we managed to plant over 200 trees, which wasn't bad going after having to transport the trees to the site, and acquaint everyone with the planting plan. Still deep snow in some places, and Trevor, who is six foot four, managed to go groin deep into a snow drift. So that gives you some idea. Cake was a luxurious bakewell tart. Other notable topic of the morning, Dan's new realtree multifunction gloves, with "trigger finger" (or nose picking) capability.
Posted by The Colne Valley Tree Society at 07:12