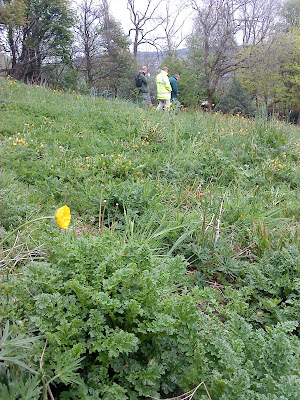 This Monday evening, Philip, Duncan and I met Ramsay Bloom from Kirklees Council, on site at Fieldhouse Slaithwaite. This site has been under discussion for the last two years, but we hope to move forward with it in the 2010/11 season. Originally it had been suggested that this field be used as an experiment in wood fuel planting, but subsequent discussions, including that with Ramsay this evening suggest that it would be better to treat this as a more naturalistic community woodland area, with some limited woodfuel planting. We already have grant money to pay for arborial work to make safe some large dead trees at the rear of the site, to replace the access gate, and to plant a selection of native tree species across the upper and side parts of the field. It is a lovely site, with great views out over Slaithwaite. Ramsay explained that the field is what used to be the grounds of Fieldhouse, a large mill owners residence, which came into Council hands some years ago, and is now converted into flats. He also showed us the remains of the more formal garden at the bottom of the slope, where, hidden amongst the trees at the side of the road, are Victorian paths, rockery, trees and shrubs. We also discovered a guerilla allotment in the far corner of the field, which we will do our best to respect when we come to planting. 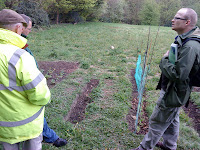 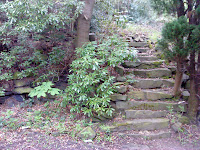 Posted by The Colne Valley Tree Society at 23:49