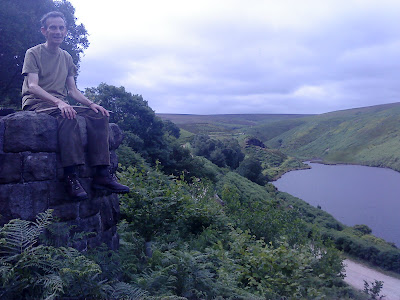 Once again, bashing the bracken (which is not a euphemism). This time up the east side of Butterley Reservoir. Difficult steep terrain, but it was worthwhile as there were quite a few small trees that were struggling to keep going under bracken which was shoulder height. Yes it all looks pretty verdant up there, but mostly that is an endless sea of bracken. Cake was a homely and retro jam tart. Very nice. First picture is of Neil sitting on a bit of Yorkshire water architecture, some sort of access hole for reservoir stuff. Other picture is of Philip sharpening his implement (again, not a euphemism). I stepped on a covey of grouse while I was up there. Six of them, and they didn't take off until I was literally almost stepping on them. I think they need to shape up a bit before the glorious twelfth, or their prospects aren't good. And we might have seen a Ring Ouzel, but we aren't sure. 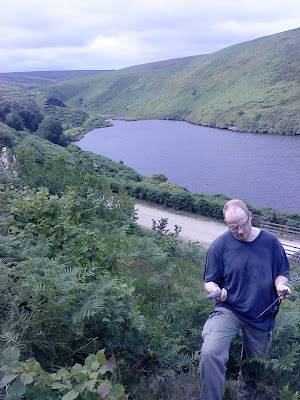 Posted by The Colne Valley Tree Society at 11:08