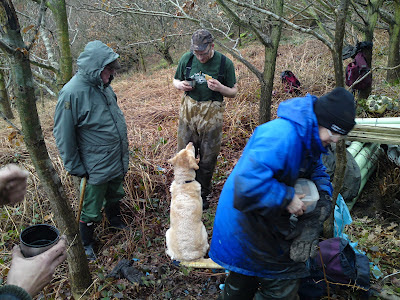 Willis wants Philip's biscuit.
Awful start to the morning, with fierce wind and rain, but it did brighten up later. We began planting 500 trees on a bracken infested hillside overlooking Meltham Mills. Probably got about 150 done, so we still have plenty of work to do. We were, Neil, Neil, Guy, Ann, me, Philip, and Ben - joined later by Trevor, Brian and Dianne. Hopefully, with a better turn out, we can finish here next week. Cake was a choice of homemade ginger biscuits, and chocolate slice. Very nice. We were joined by Mr Sykes and his dog Willis. Willis enjoyed a ginger biscuit.
Posted by Simon Lyes at 08:09